That was the advice Bill Clinton gave to Tony Blair about how to work with incoming President George W. Bush. It was interesting advice. It may not have worked for Blair. He did establish a close relationship with Bush, but it is not clear what he gained from it. Blair could occasionally moderate policies that particularly perturbed the rest of Europe. Some of Blair’s pet initiatives were adopted by Washington.

It is, now that I think about it, oddly vice presidential. (Would I like to write a book on this – you bet!)

Blair, in building the “special relationship” did not seek to bargain with the president – hard-edged balancing of interests, the horse-trading that is politics and diplomacy. Instead, like a vice president, Blair sought to build a relationship, demonstrate that they were on the same side, and generally be helpful.

The strategy was that Britain could best play a role on the world stage by influencing the United States. Sort of like a Senator taking the VP slot. A Senator can do some things on their own, but there are limits. An influential vice president can do a great deal more. It is an interesting question as to whether or not it is an effective strategy. Blair got wrapped up in Iraq, tarnishing his legacy. But that was his choice, he believed in the mission himself.

He did have some achievements (detailed in the link above), and also what did he really need? Britain is a 1st world economy with extensive and well-established trade and financial inter-connections with the U.S. There may have been some areas in which the U.S. could be helpful, but Blair was hardly dependent on U.S. for his nation’s economic fate. Britain also did not face any true existential security threats. On lower level issues, terrorism, intelligence sharing, and military cooperation links were well-established. Blair did get some support on some diplomatic issues, a modest win.

It was an interesting gamble, sort of the gamble a vice president makes. VPs know that serving a successful president gives them their best shot at the presidency. If Bush’s foreign policy had been successful and Blair was his partner he would go down in history as a great statesman – a Churchill. Didn’t work out, but you can see the strategy. (Lest all of this seem too calculated – Blair, and most VPs – are striving to do what they think is right.)

From Blair to Bibi
Israel is not Britain. They are a small country in a very bad neighborhood. There are innumerable ways in which the United States can make their life easier. Both countries have intimate, complex relations with the United States. But Britain is about a fifth the size of the U.S., whereas Israel is more like a fortieth. When the U.S. shifts Britain has a bit more ballast. Further, Israel – a pariah state whose very existence is opposed by many in its neighborhood – has a lot of stuff to worry about.

Israeli Prime Ministers have had to stand up to U.S. presidents in the past. Even during periods of strong relations (say between President Bush and PM Sharon) there could be sparks. Israel does not have the option of adopting Blair’s strategy. They have real interests that need to be protected.

Some students of politics and international affairs emphasize personal relations between key players (like my dissertation). It makes for a good story, but often there are big structural factors that shape events and outcomes. 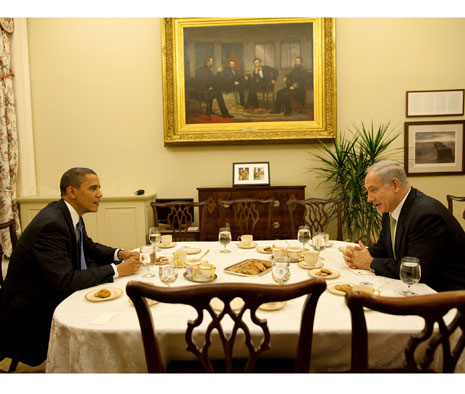 That being said, Blair’s “Hug them close” strategy is not wholly without merit. When Clinton told Blair to be his successor’s friend, Clinton knew the president needs friends. Knowing that conflict is likely, the prime minister should think pretty deeply about what he or she can do to make the president’s life easier.

And this is where we get to Bibi. Clearly he and President Obama do not have warm relations. Obama comes in for a great deal of criticism from pro-Israel circles. Just to be clear, I am an unabashed supporter of Israel – and readily try to defend and explain her and how Israel is a strategic asset to the U.S. – but with particular sympathy for Israel’s impossible political system that skews results in all sorts of ways.

I think the record shows how that has gone.

Some tensions between the U.S. and Israel are inevitable. It is the nature of the beast and Israeli leaders sometimes need to stand up to the president. But trying to be the president’s friend is a good strategy for any world leader, a way of building capital when conflicts arise.