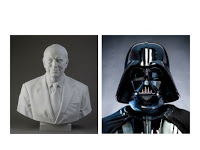 The past isn’t dead, it isn’t even past – William Faulkner
With the recent unveiling of Vice President Cheney’s bust on Capitol Hill history re-emerged. Cheney remains a polarizing figure, not the least because of his own continuing vociferous criticism of President Obama. In an unprecedented moment, not a single Democratic member of Congress attended the ceremony. Vice President Biden attended and spoke.

When Cheney left the House of Representatives (to become Secretary of Defense for George H.W. Bush) a Democratic colleague stated that this was the day collegiality in the House dies. He was known as a conservative who worked across the aisle. Even when he was selected as Bush’s VP he was seen as a sober, well-regarded choice. (I was not the only one who watched the 2000 VP debate between Cheney and Lieberman who thought the wrong people were at the top of the ticket.)

Interestingly, the most noted point (to everyone but yours truly) in George H.W. Bush’s recent new biography was the ex-President’s criticism of Cheney and his role in the Bush 43 White House. He was called iron-ass and scolded for his harsh rhetoric.
And yet, Bush pere ultimately granted it was his son’s decision to invade Iraq and everything else that occurred in his difficult presidency. So what exactly is Cheney hated for?
Ahmed Chalabi
He was a polarizing figure, to say the least. There are his many detractors who claim he was a smooth-talking con-man who, peddling fictional intelligence, led us down the garden walk into the hell-scape of Iraq. I met Ahmed several times and knew people who knew him pretty well. He was quite impressive and charming in person. I don’t know if every single thing he told the U.S. was completely true. But I have some sympathy for him. His country was ruled by Saddam Hussein – a monster of epic proportions. Removing Saddam from power was essential above and beyond all other things. Ben Franklin didn’t always play straight with French when he served as the Continental Congress’ Ambassador in Paris.
Chalabi may have been a con artist, but truly if a con artist scams you it’s because of you’ve scammed yourself.
Cheney backed Chalabi, was close to him and the Iraqi National Congress. But Bush didn’t like Chalabi, he thought the Iraqi people should pick their own leader. For all of the talk of Cheney’s influence, he couldn’t get much of a hearing for his favored Iraqi proxy.
So which is it? An all powerful Cheney who duped the President into invading Iraq but somehow couldn’t cast the lesser spell of charming Bush into embracing Chalabi?
Cheney as Staffer
In a book on the chiefs of staff, Cheney recounted how Vice President Nelson Rockefeller invited everybody to the new Vice President’s residence – everyone but Cheney. As deputy chief of staff (to Rumsfeld) and then chief of staff in his own right, Cheney had run interference for Ford – keeping Rockefeller out of things. Rockefeller wanted to spend money, Ford didn’t. Rockefeller was constantly coming to the President with new proposals for programs, Ford would hand them to Cheney, who would shrug and say, “I’ll staff them out Mr. President.” The Vice President blamed the chief of staff for his being cut out of the policy process, but Cheney stated he was acting at the president’s behalf. And oddly in his remarks, Cheney seemed hurt by his treatment at the hands of Vice President Rockefeller.
Ultimately, Cheney was blamed for his tone, that he made statements that were too harsh and undiplomatic. This is a common critique when things to appear to be going badly. The current administration suffers from it as well – much of the criticism of the president’s policies relates to the president’s failures as a communicator. Some of these criticisms are legitimate, but there is a certain sense that you can’t put lipstick on a pig.
Presidents don’t like to say no, they delegate the role, whether to the chief of staff or the Vice President or someone else. They also don’t like to deliver the tough messages. An old friend of Eisenhower advised Nixon that Ike always needed a patsy around, someone who could take the heat for him. That’s what Nixon did, delivering red meat speeches around the country.
Cheney served up the red meat as well. And he seemed to like it – in fact his post-Vice Presidency has been devoted to continuing to serve up steak for the party faithful. But the only important customer for the red meat was the president, and when he didn’t want steak, the VP had little else to offer.

Vice Padawan? Darth Patsy?
Patsy or Darth Vader or a bit of both. In Star Wars, Darth Vader was a monstrous and compelling figure – truly the heart of the movie (I haven’t seen the new one yet.)

But when his boss orders him to kill his son… At the same time, the Emperor is willing to drop Vader in an instant (just as he dropped Count Doku decades earlier) when a better Jedi comes along.

These are the realities of vice presidential power.