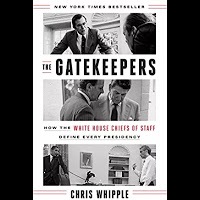 I wrote this yesterday morning, before Kelly’s first day on the job as White House chief of staff. His opening move, firing the grossly inappropriate Anthony Scaramucci, was a good one. He has also begun reaching out to Democrats in Congress. Kelly does have significant experience there, but I’m still not certain that – as able as Kelly is – if he has sufficient political experience to pull of this role. But I believe some bigger factors, enumerated below, also will prevent him from being effective. Also, the continual controversies coming from this White House raise new challenges. Even Jim Baker (probably the greatest recent White House chief of staff – see below) would be challenged at this multiple scandal a day pace.

Any discussion of Kelly’s appointment to be White House chief of staff should begin with the simple and true observation that General Kelly is an extraordinarily capable man. No one should ignore the depth of his talent and experience. But in considering his prospects – before considering the external factors – it is important to consider what the White House chief of staff does.

What Does a White House Chief of Staff Do?

If you have time, read this excellent book by Chris Whipple – or at least this interview. But, the summary would be that the chief of staff tries to make the White House (and to some extent the government as a whole) work for the president. Note the lower case w – not work as in be employees of, but rather organize complex institutions in a way that serves the president’s decision-making needs and then carry out the president’s priorities.

The CoS has to ensure that the parts of the White House are working effectively and working in synch. Are the Communications office and Legislative affairs coordinating to ensure the messaging around a new initiative is timely? Are potential appointees being vetted properly? Are executive agencies carrying out the president’s mission (if not, why not?)

This barely scratches the surface of the nuts and bolts of the CoS role. But rather than diving in deeper, let’s instead turn to comparisons to Kelly.

Ghosts of CoS Past
In recent history (that is my memory) there are three cases of a chief of staff being brought in to stabilize a White House in deep trouble. Howard Baker was brought into the Reagan White House after Iran-Contra, in early 1987. Leon Panetta became CoS in the Clinton White House in mind-1994. Josh Bolten became CoS for Bush 43 in 2006.

Baker had been Senate Majority Leader and had served three terms in the Senate. Panetta had previously been OMB chief (which is a lesser known but hugely powerful position). He had also been in the House for 16 years. Bolten had been OMB chief, deputy CoS for policy, and White House director of legislative affairs.

Looking over these four, effective White House chiefs of staff, it looks like there are two basic paths to the position. Capitol Hill experience, White House experience, or some combination thereof.

I’m not sure this bodes well for Kelly as CoS. There is little question he has the expertise for the form of the job – establishing clear lines of authority and overseeing a large complex operation. But does he have the appropriate knowledge of the substance?

The substance of the White House chief of staff role is politics which is the art of the possible. Effective political action requires balancing policy preferences with political realities. This problem space has multiple dimensions. Understanding policy options requires a broad-based general knowledge. Politicians may have a few issue in which they have deep expertise, but they cannot master every issue. They do need to know enough to be smart consumers of policy. General Kelly will, undoubtedly, have vast experience with many critical policy issues, but these represent a fraction of the issues a president must address. Does he have significant experience with the federal budget, natural resources and the environment, energy policy, urban affairs, or judicial appointments?

The politics side of the equation is also challenging. The core issue is congressional relations. Congress is not dictated to, it is bargained with. Politicians need to balance a range of priorities. No question that General Kelly knows the form – that is establishing priorities and adapting them to the situation (he was a battlefield commander.) But the substance is in question, there is a huge amount of tacit knowledge about the needs of political actors and the institutions through which they operate (like the arcane Senate procedures we all recently witnessed.)

In fairness, Kelly was the military assistant to SecDefs Gates and Panetta (him again… hmmm.) He also served in the Marine Corps legislative liaison office and was the Legislative Assistant to the Commandant. So he is not a political amatuer, but his political experience is through a pretty specific lens.

What about Baker?
I haven’t talked about Jim Baker, Reagan’s legendary chief of staff. On paper, Baker was not particularly well qualified. He had been an Undersecretary at the Department of Commerce in the Ford administration and run political campaigns in Texas. It is worth noting that Baker so impressed Ford that he ended up running Ford’s campaign. He then impressed the Reagans (particularly Nancy) so much that they made him chief of staff, despite his being an ally of their former rival, George H.W. Bush. So resume is not a definite indicator. Baker was exceptional regardless of his previous experience.

So it is entirely possible that Kelly will prove excellent in the chief of staff role (we can certainly hope so.) And Kelly’s own distinguished career is certainly a mark of great ability.

Other CoSs have struggled with presidential discipline issues. Reagan and Clinton come to mind. But, fundamentally they were political actors who understood the game and what the key outputs were. If they wanted a policy to be enacted, they would need to take certain steps.

If anyone can… um… persuade the president to lay off the Twitter, it is General Kelly. But it is not clear that anyone can do this. The current occupant of the Oval Office does not appear to see his actions in a systematic context contributing to definable political outputs. Can Kelly help him set priorities both in outputs and then in defining the actions to produce those outputs (say in legislation passed.) Time will tell…

The Dying Elephant in the Room
My regular readers (you out there…) know that I am a big fan of Steve Skowronek‘s work. At the core of his work is that presidents are much less the masters of their fate than we would like to believe and much more the product of their time. (So echoing what I wrote above) a president should choose their time to be president wisely.)

I’ll write more about Trump in Presidential Time later (but here’s my overview), but long and short is that the president is the type of president presiding over the collapse of a political order (last two presidents of this type were Carter and Hoover.) The GOP has dominated politics since 1981, but now the policy solutions that were successful in the early 1980s are no longer relevant. Carter and Hoover were, to a great extent, technocrats who promised to do government better. Trump, in his way, promised to do the same.

However, the thing about the Skowronek typology is that the collapse of the political order is not because of the president’s competence (or lack thereof.) It is because the party is factionalized between groups committed to foundin
g policies and groups that recognize those policies are no longer viable. We saw this dynamic play out in the health care repeal efforts where the group on the far right committed to absolute repeal out of fealty to the principle of small government and the centrist group, which saw repeal as deeply unpopular in their district, were each large enough and vocal enough to prevent effective policy-making.

So regardless of the chief of staff or the president, it may be very hard for anyone – even a Lincoln – to govern effectively.


Pence’s Play
Did you really think I would write all of this without mentioning the vice president?

We don’t know much about what VP Pence has been up to. He’s been outwardly loyal, traveling a bit, and liaising with Congress. Typical and important VP stuff. I’ll write more about him later as well.

But vacuums in the White House are good places for VPs to play. They don’t want to be fighting for power with other players, but if no one has a good handle on an issue or problem, the VP can fill the vacuum. If Kelly, will running a tight ship, needs help balancing policy and process, Pence is well placed to assist. (I wrote before that Pence would be a backstop to the chief of staff.) It is also worth noting that the White House director of legislative affairs, Marc Short, was a Hill staffer to Congressman Pence.