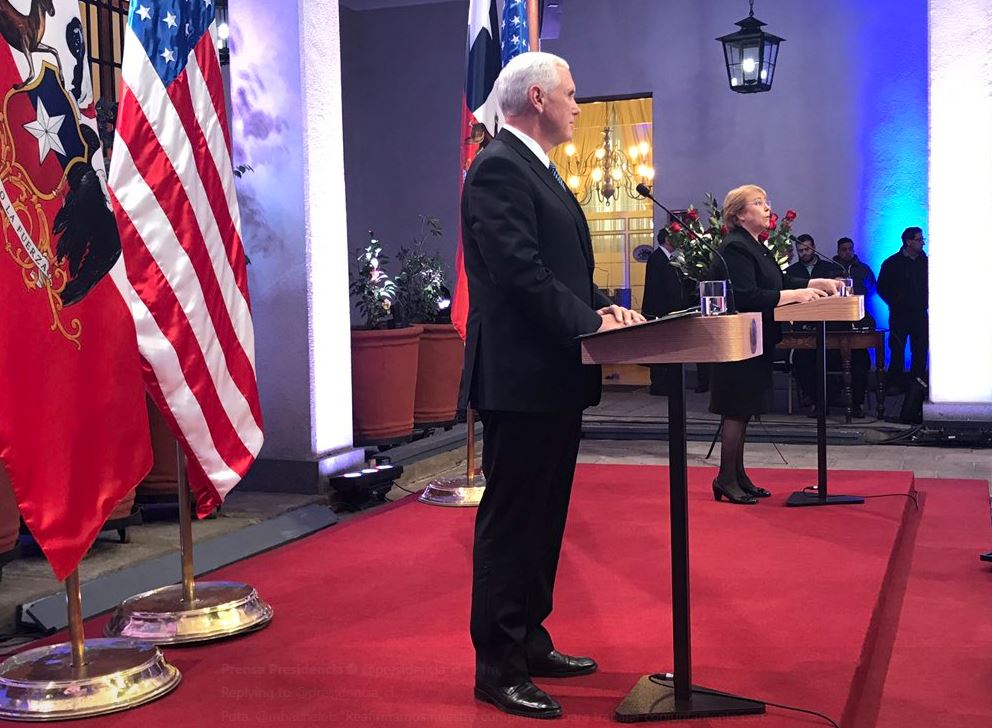 VPWatch1: VP as Signal – An Experiment

We are watching an embattled presidency. Approval ratings, given a reasonably strong economy, are astoundingly low. The White House is in a constant state of leaky turmoil. And the president is frankly divorced from any understanding of basic political inputs and outputs. I could say more – my thoughts on that man in the White House are no secret – but my point here is to be analytical.

But there is an analytical challenge. Over the course of several presidencies the vice presidency can be a useful indicator. But, as a short-term indicator it is more difficult to say. The signal is weak. First, most of what can be known comes out after presidents have left office and memoirs have been written. Vice presidents have traditionally kept their counsel to the president private. This was a precedent established by Mondale and – for the most part – kept since. Because of this, what we know about vice presidents may not reflect the most critical issues. Mondale (again) was involved in many things, but information about his involvement on the Soviet Union or Iran was limited. Cheney had little to say about “No Child Left Behind” or PEPFAR, two of Bush’s primary initiatives.

On the other hand, when Israeli-Egyptian negotiations were flagging, Carter summoned Mondale from the White House to join the parlay at Camp David. From the perspective of studying the vice president, it highlights the value Carter placed on his counsel. From the perspective of the president’s needs it indicated that Carter was not doing so well with the Israelis. Mondale had a strong relationship with them and they trusted him more than the president.

And that is a good place to begin. The Vice President has just cut short a trip to South America. It does not appear that the president summoned him. What was the point of his change in plans.

Charlottesville was a terrible thing, but extremists have marched before and sadly will again. The violence and death was truly, truly awful. Is it a national crisis on the scale of Hurricane Katrina? JUST TO BE CLEAR – I HATE NAZIS AS MUCH AS ANYONE! But in this case I’m writing from the head, not the heart (which is sick and sad right now.)

A president saying the appropriate things would have made this a smaller and shorter story – and frankly could have had a salutary affect that we could have really used. It was the president’s failure to do so that has made this a crisis.

When Presidents are in political trouble of their own making, the vice president can travel and avoid the cross-hairs. So what were Pence’s calculations? What was he thinking?

Does he believe he can talk sense to the president and help the administration work its way out of things? Are we close to a Constitutional crisis and Pence figures being nearby is smart? Did the White House staff beg him to return?

Tough to know, but interesting to consider.

One important note is that for all of the leaks and reported intrigue – Pence does not appear to be a central player in this cut and thrust. He rarely appears in any form in the endless reporting. In fact the only hard exercise of vice presidential influence we’ve seen so far is that Pence persuaded Trump to fire Flynn. This works to Pence’s favor – since Flynn was a nightmare politically, professionally, and personally. But it also indicates that just maybe the President listens to Pence. After all, Flynn was deeply loyal to Trump and vice-versa. Trump’s efforts to protect Flynn, as much as anything, have endangered his presidency.

This is a strong indicator that Pence thinks, or people in the White House think, that the Vice President can help put it out the self-igniting dumpster fire that is this administration.

Pence on the Fence
Like most politicians, he tries to have it both ways, and has done so effectively. He condemned neo-Nazis (not a hard call really) while also saying he supports the president. His statement in Argentina on Venezuela was a perfect example:

As President Trump said just a few days ago, “We have many options for Venezuela.”

The Vice President elided the ludicrous and counterproductive Presidential statement that we may have military options in Venezuela, but still cited and supported the president.

Say what you will about Pence, he’s pretty good at walking this fine line.