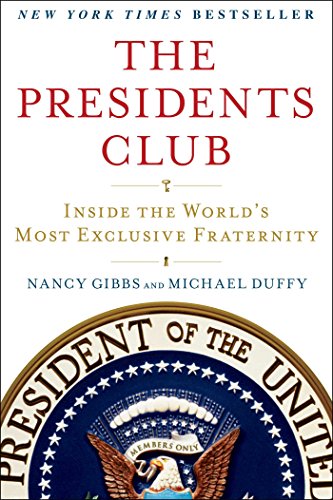 Reckoning & Revelation in the 2020s Director’s Cut I: The Ex-Presidents

As my regular readers (hi mom!) know, I am pretty convinced the 2020s are going to be huge, a real political earthquake. I’m pitching papers to conferences to force myself to write this up. In less than two weeks I’ll be presenting one paper at the American Political Science Association. In November at ISSS-IS on the national security/foreign affairs implications. I have further papers planned on political violence in the United States (unfortunately there will probably be some) and technology policy. If each of these papers is five to ten thousand words, I’ll have the better part of a book in no time.


But I have stray thoughts related to my core thesis, probably not worth a book, but that I cannot just let alone. So this is the first installment of the director’s cut.

The President’s Club is a fun, interesting book that describes the relationships between the present and former presidents. During my dissertation it had some neat details about vice presidents, but it was also about relationships between top politicians, which was certainly relevant to my dissertation. Occupants of the White House found their predecessors useful as sources of advice, political cover, and as emissaries. Of course there was usually something problematic in the relationship as well. Immediate past presidents wo

uld tend to move to the background and let their successors make their own way. (If there was an electoral defeat, that often left some lingering hostility – although Carter and Ford and Clinton and Bush 41 all overcame this to become good friends.) Nixon, clawing his way back to respectability, was happy to help his successors and he was very capable. But of course, he was Nixon, a close association was not always smart politics. Carter tended to do his own thing, when he was good (as head of election monitoring in Panama in 1989) he was very good. And when he was bad (negotiating with North Korea in 1994), he was real pain in the ass.

Probably the ideal relationship was Truman-Hoover. FDR of course wanted nothing to do with Hoover, who was political poison. But when Truman took office in 1945, time had passed. Most importantly, Truman needed Hoover’s organizational skills to oversee post-war relief efforts in Europe (Hoover had become famous overseeing relief efforts after WW1). Hoover welcomed the opportunity to serve and he and Truman became friends. 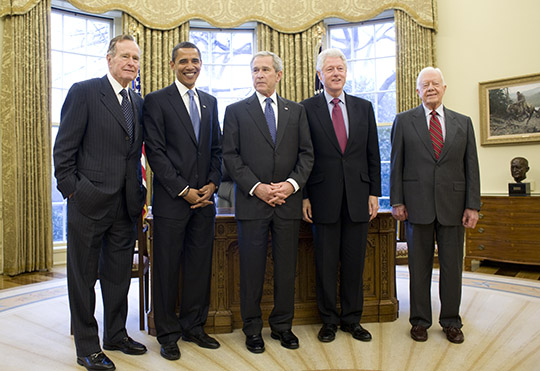 So what does this have to do with the 2020s? If, as I expect and predict, a Democrat wins big in 2020, they will have two energetic, capable, and generally popular Democratic predecessors to help them. With a big electoral victory, the next will hardly feel in the shadow of Obama or Clinton and thus feel freer to work with them. There is no significant personal or political baggage to deep collaboration. Clinton will be an energetic 75 and Obama will only be 60. They will both have lots to contribute. Further, the current president guts and filets the Republican party, Bush 43 (who personally likes Clinton and Obama) may be willing to play a role. He could be an extremely valuable emissary to traditional GOP constituencies who choose to adapt to the new era.

The traditional roles of the ex-President have been relatively low-key, but extremely useful. The ex-Presidency however is now increasingly institutionalized. Ex-Presidents sit on top of a personal network of think tanks, foundations, and communications operations. An ex-president is more than just a prominent person who can go out on the campaign trail or meet a foreign leader (although that will remain important.) They are now in a position to generate deep policy analysis, mobilize public interest, and support causes and efforts.

(Carter and Bush 41 will of course be very old, and their public activity will probably decline – but you never know!)

Basically an popular and allied ex-president is a huge force-multiplier for a sitting president.

And the VP?
My take would be incomplete without mentioning the vice president. Two notes, one is that under Clinton, VP Gore was the key interlocutor with President Carter (with whom Clinton had a strained relationship.) This might be an excellent emerging role for the vice president, managing relations with the former presidents. You cannot pawn an ex-president off on a staffer – it just is not appropriate. But the vice president has sufficient standing and the ex-president will understand.

But what about the still very active VPs on the national scene? Increasingly the ex-VP is also acquiring institutional trappings and in many cases they are generally well regarded. Could a president give the former VPs a “seat at the table” at the President’s Club? Gore could certainly be seen as an honorary member, and why not Biden? (Cheney will probably not find himself in accord with the Democratic president of the 2020s).

Social Media
There are libraries about who social media has changed everything. The long and short is that it enables many-to-many communications. The interactive nature creates a much more engaging experience and a stronger relationship. FDR let Americans into the White House with his fireside chats. An effective social media endeavor can create a feeling of personal connection.

At campaign events, Clinton would work the rope line furiously, knowing that every hand he shook would be converted to him – forever! With social media, politicians can now do that – at scale!

The current president has used social media in new ways, but not necessarily strategically. But imagine the president along with several former presidents and vice presidents, backed by some serious analytics, reaching out to influencers at various micro and macro levels all over the globe.