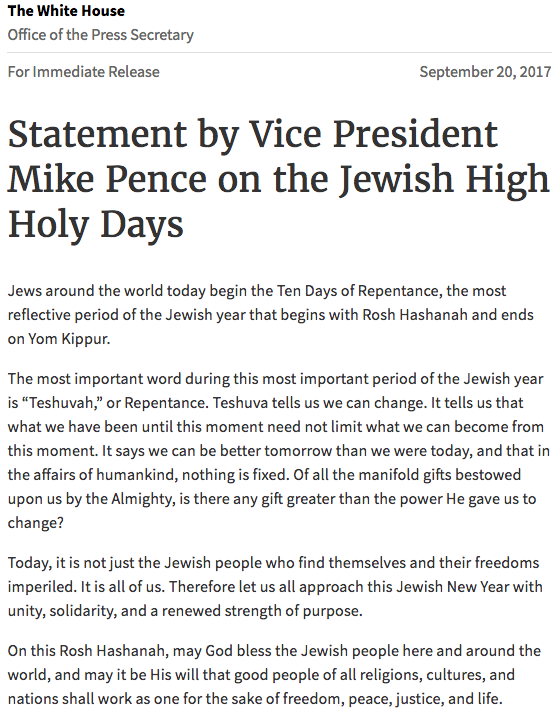 I know I just wrote a post yesterday analyzing the role of the Vice President in this White House that requires a follow-up. But, like Jews around the world, my mind is elsewhere. We are entering the High Holidays, the Days of Awe. Tonight begins Rosh Hashanah, literally the “Head of the Year.” It is the start of a new year and a time of introspection, but also a time to ask forgiveness.

Political leaders in the United States typically send greetings to the American Jewish community on its major holidays. There is nothing terribly remarkable about these greetings. They are like thank you notes for gifts, courteous and necessary. I would not draw any policy conclusions from these statements about these leaders positions on Israel or any other issue of concern to the American Jewish community – or anyone for that. 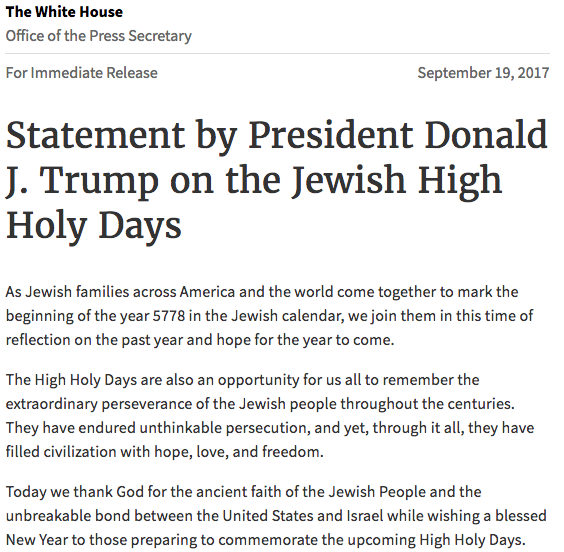 The President’s statement is perfectly fine. It briefly mentions the purpose of the holiday, had a nod to Jewish history and the place of the Jewish people in the world, and ends by mentioning the deep bond between the United States and Israel. I have nothing to criticize about it.
The Vice President’s statement, in comparison, is a bit deeper. Only at the end does it give the obligatory best wishes to the Jewish people on their holiday. Instead we get a short homily about the central concept of the Days of Awe – Teshuvah. The statement then extends it to wishes for introspection and a better year for al.
On the one hand, the VP’s statement might be a bit too religious and not sufficiently political. But I’m rather impressed with it. It makes specific references to the meaning of the holiday and relates them more broadly to all humanity. It has a voice in way that perhaps the President’s statement does not.
Within the tangled channels of White House decision-making, the Vice President’s office is a fast cruiser amongst a thicket of dreadnoughts. It is smaller than OMB or NSC, but it can choose its fights and focus almost exclusively on meeting the needs of its principal. Thus, it can find a unique voice.
Of course Presidents can usually attract the finest communications talent. Another possible conclusion is that the White House staff is starting to function adequately, but perhaps not at a very high level.
Of course that’s reading quite a bit into a relatively minor item. Perhaps my Teshuvah is to lighten up and get a life (or at least spend the one I have on something important!)
Shana Tova Umetuka. To a happy and sweet new year.