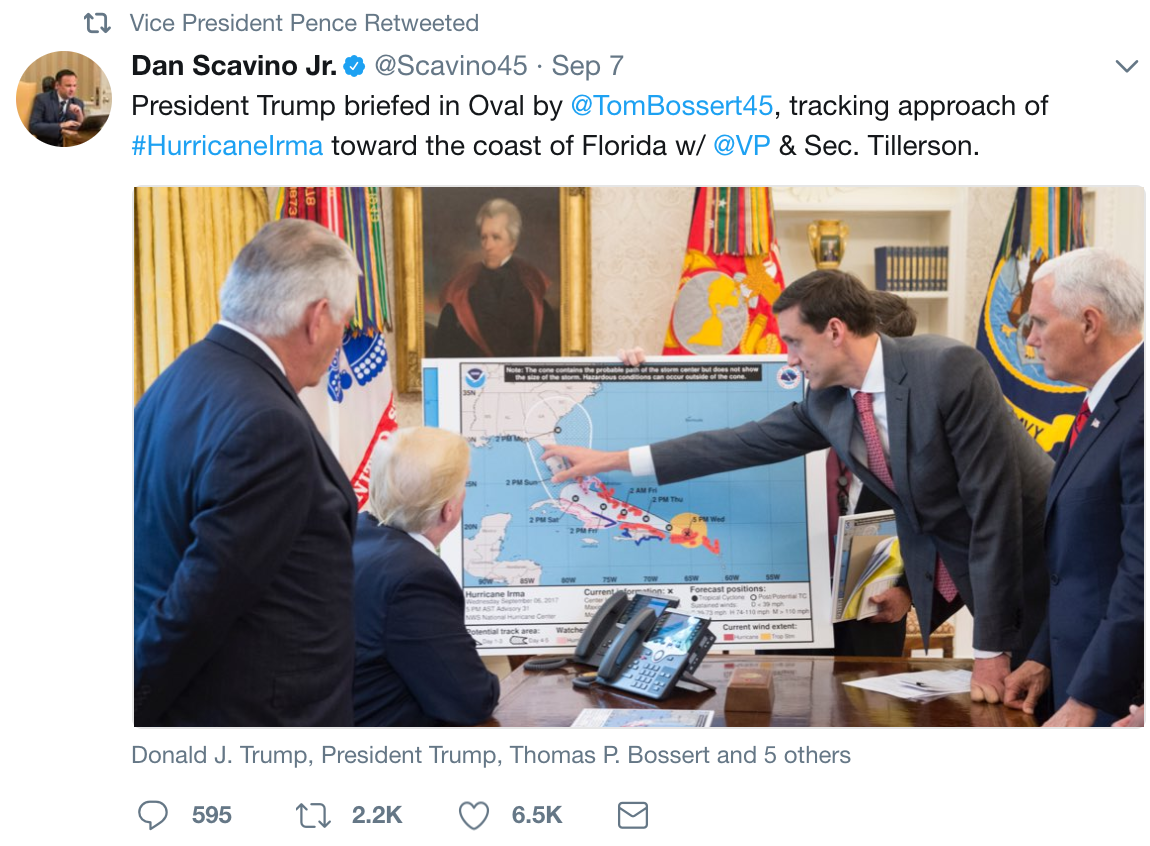 So, here’s an overdue installment of VPWatch, my little project to understand the current White House by tracking the Vice President.

Two critical terms to consider are access and influence. The latter demands the former, but is not sufficient. If the Vice President cannot see the President or engage with the policy process, the VP cannot hope to have much policy influence. However, as Dan Quayle demonstrated, regular access to the President is no guarantee of influence.

Assessing Access
Pence has access and a lot of it. Account after account mentions that Pence is at key meetings. When the national security team delivered “American Power 101” to the anti-globalist President at “The Tank” at the Pentagon – Pence was there.

The infamous meeting where the President shared his displeasure with the Attorney General – Pence was there.

The meeting with Congressional leadership in which the President decided Chuck and Nancy were his new best friends – Pence was there.

Pence is up at the U.N. with the President right now. (UPDATE: The Vice President is popping back to DC for the Senate Republican Policy lunch. Emphasizing his important role as legislative liaison. See below.)

So the Vice President has access in this administration.

Pence’s Proxies
Another critical factor in understanding the VP’s role is the roles of their allies on the White House staff. This goes way back. In the Carter administration, the President specifically instructed the National Security and Domestic Policy Advisors to appoint Mondale aides as top deputies. Carter wanted to ensure the Vice President was fully engaged. This trend has continued. Reagan appointed VP Bush’s close friend Jim Baker as White House chief of staff. This trend has continued and reached something of an apogee in the Obama White House.

Such well-placed aides not only insure that the VP is engaged in the policy process, but are a source of influence in their own right.

So it should follow that Pence allies and staffers are playing an expanded role in the current White House. The former situation is clearly the case, the latter is not as obvious.

The most notable Pence ally on the White House staff is Marc Short, director of legislative affairs, who had been Pence’s chief of staff when Pence was a congressman. This is a pretty significant role. It fits the model that, over the past 40 years, VPs have played a significant role in congressional relations. Also worth noting, Pence – who appears to choose his battles within the White House carefully – weighed in for Short to get the position.

There’s another interesting data point, General Kelly, in his efforts to stabilize the White House, has been bringing in more experienced figures. The new director of presidential advance (that means administering the details of presidential travel) had been Pence’s advance director. This is not necessarily a position of political influence, but it does highlight how experienced vice presidential staffers can help bring order to a chaotic outsider-run White House.

There have not been any reports of Vice Presidential staffers building strong networks in the White House in their own right. That does not mean it has not happened, only that it has not been reported. Pence replaced his long-time low-key chief of staff with Nick Ayers, who had been the key liaison between the Trump campaign and Pence’s team in the election. He was brought on to help the VP advocate for his preferred policies within the White House. (There is nothing new under the sun, Mondale’s chief of staff Richard Moe focused his energies managing the president-vice president relationship.) While we have not seen much about Ayers, it would be no surprise to see him playing an expanded role in his own right.

Up on the Hill
Since the emergence of what Joel Goldstein calls The White House Vice Presidency (that is regular access to decision-making), Capitol Hill has been a primary arena for vice presidential activity. Every vice president from Mondale on had previous Capitol Hill experience and used it on the administration’s behalf. Chase Untermeyer, who served as an assistant to George H.W. Bush both as President and Vice President observed:

The House and Senate are often linked to private clubs or fraternities in which it helps enormously to have been a member and to know the secret handshakes.

Pence has been no exception. Here is a great description of his efforts in the Senate to lobby for the healthcare repeal that gives a sense of how Pence works:

Ms. Collins said she was talking with Arizona Sen. John McCain, another “no” vote, when she felt a tap on her shoulder. It was Mr. Pence, who was at the U.S. Capitol to break a potential 50-50 tie vote.
“And he said to me, ‘boy, are you tough,’” Ms. Collins said on CNN’s “State of the Union.” “But he softened that by putting his arm around me.”
“He has always been extremely courteous in his conversations with me. He then started talking with John, we were reminiscing in some ways, and then it was obvious he wanted to have a private conversation with John about the bill, so I stepped aside and did not participate,” she said.

So we see that Pence has access, he is in the mix of White House policy-making. But that does not guarantee influence – particularly in the currently chaotic administration. Does any of these vantage points – either personal or by proxy – translate to substantial policy influence?